How to Tell If a Guy Really Likes You

Figuring out if a guy likes you or not seems like rocket science at times. Men are just so mysterious! They keep to themselves a lot too. Good luck getting anything out of them.

However, we all show subtle signs when we like someone. They might not even notice that they’re doing those things — but you will. Here’s a list of things you’ll notice a guy doing if he’s into you. He won’t have to tell you anything — you’ll know.

Watch Out for His Body Language

Body language can tell you if he likes you. We all get a bit more touchy when we’re with someone we like, do we not? Guys are no different. They’re not taught to show their emotions in any other way. So if he’s constantly showing you affection by gently touching you or brushing you off — you’ll know he’s hot for you.

He might also try his best to always face your way. That means he will even point his feet in your direction. Don’t stare at his feet though. You’ll know when they’re facing your direction.

Another thing he might do is try his best to stand or sit next to you in a group. He might also mimic your movements, but not in a mocking way — people do this unconsciously. If you cross your legs, he’ll do it too.

He Constantly Smiles at You

Another obvious sign a guy is interested is if he’s smiling. We’re not talking about polite smiles — those you give people when you want them to know you’re paying attention (but are not really interested). This doesn’t include fake smiles either (and you’ll recognize a fake one when you see it).

If he’s genuinely smiling when he’s around you, that can mean he’s truly into you. Smiling shows you that he is happy and having a great time. It’s an invitation for you to smile as well. It’s contagious, and if you want him to do it all the time — you should do it too.

Does your crush try to maintain eye contact for as long as possible? Congratulations! That means he’s into you.

Bear in mind that these are not those creepy kinds of stares. It’s just that he likes you so much he can’t stop looking at you. Additionally, it’s a good sign that he’s paying close attention to what you’re saying.

RELATED: See The 8 Habits All Creepy People Have

He might also scan your face and look at other features of it as well. He’s not looking for any flaws. It just means he’s admiring how beautiful you are. If his eyes wander off to your lips — he’s all yours.

He Focuses on You

This is another classic telltale sign. When a guy likes you, you’ll always have his full attention. That means he won’t be looking around at other people at all. He won’t even be on his phone that much. In this day and age, that’s one of the surest signs he likes you.

Focusing on you lets you know that he’s completely engaged in the conversation. If you’re the only person he pays attention to in a room full of people, you’re one lucky gal!

He Treats You Differently 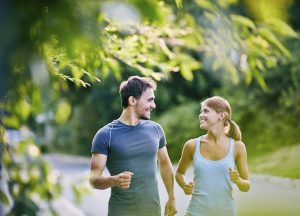 Did you ever notice that he treats you differently than other people, i.e., that you’re the only girl he treats a certain way? If that’s the case, there’s a good chance that he genuinely likes you.

How does that make sense? Well, we always tend to be nicer to people we like. We want to help them out more and treat them better in general. We do that so much that we even treat them differently than all of our friends. In case you’ve noticed any of that, know that he thinks you’re special.

If you still haven’t noticed any of this, don’t worry — you might eventually. All you need to do is spend more time with him and his/your friends. That’s the best time for you to pay closer attention to how he acts. Once you notice it, you’ll start seeing it in everything he does, even simple things.

He Always Invites You

Whether it’s via social media or real life, he always invites you places. It doesn’t matter if it’s a party, a group hangout, or just him running errands. He invites you almost everywhere because he wants to spend as much time as he can with you.

Whatever the case, you’ll always know where you stand with a sign as clear as this one. He includes you even when he’s doing something with his friends. Why? He wants them to meet you as well, just so they can see what he sees.

If he teases you all the time, don’t be upset with him, especially if he’s doing it in a playful way. All he’s trying to do is grab your attention.

Teasing is something you can notice in younger men. They simply don’t know what else to do to get the attention they want. So they start picking on you. However, make a difference between that and mocking.

However, it’s never a good idea to involve yourself with a man who doesn’t know how to get your attention, so he resorts to being rude.

We’ve listed only some of the signs a guy is interested. When you notice one, you’ll start seeing the rest of them. Be sure that many more will follow. However, you might not need other signs once you realize a guy likes you.

At that point, all you should do is figure out if you like him back. Then, you’ll know if you should pursue him or not. However, one thing’s for sure — he definitely won’t reject you.